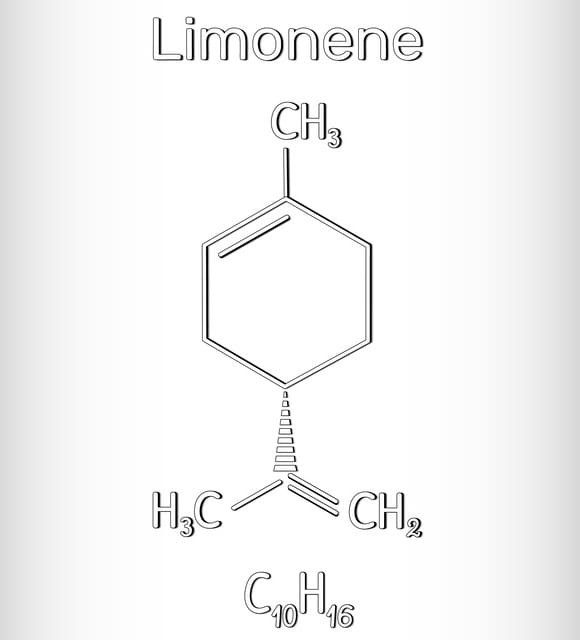 Limonene is second only to myrcene as one of the most common terpenes found in cannabis. Terpenes are chemical substances found in several plants. The role of these substances is to give the plant their organoleptic properties, i.e. their flavor and aroma. Limonene is essentially found in several citrus fruits such as lime, lemon or orange. It is also found in rosemary and mint. This terpene has several effects and virtues and can be used for different purposes. For example, limonene is used in many pharmaceutical and cosmetic products. It is also used in cleaning products, in the food industry and in aromatherapy. This terpene interests you and you want to learn more about it If so, discover in this article its benefits as well as some necessary information to know about it.

The identity card of limonene

Here is presented some information to know about limonene:

The different properties of limonene

Limonene, as we will see throughout this article has many virtues:

The structure of limonene 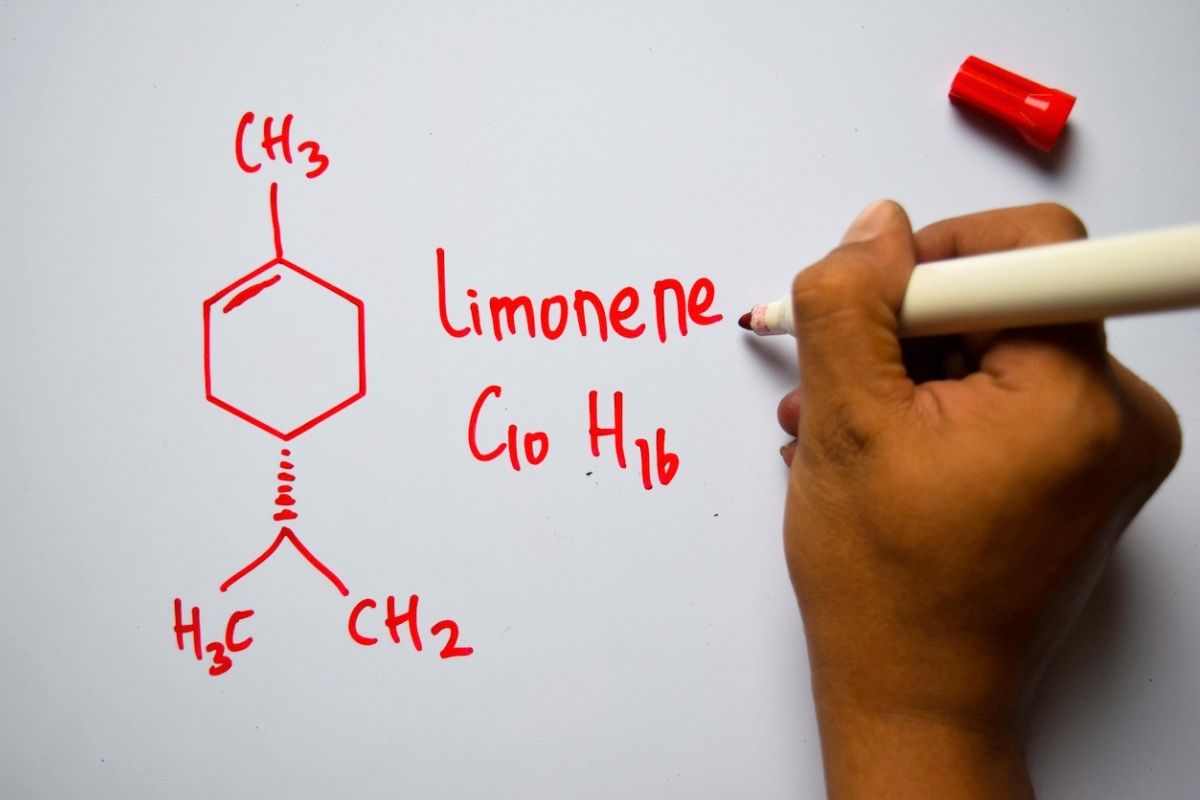 As we mentioned in the identity card, limonene is a monoterpene. But, where do monoterpenes come from These are derived from the assembly of two isoprene units. Therefore, we find 10 hydrocarbon atoms in monoterpenes. It takes the form of a volatile and colorless liquid and then settles on the peel of citrus fruits. As for the cannabis plants, it is found in the glandular trichomes. Moreover, it is in charge of the protection of the plants against certain pests and infestations. It is necessary to know that the terpene has a rather characteristic aroma that the pests perceive as a toxic odor. It therefore acts as a repellent.

Aroma and flavor of limonene

The organoleptic properties of this terpene are easily recognizable and very specific. It is these that give plants that characteristic aroma that is sweet, bitter and acidic all at once. In other words, the limonene is this chemical substance at the base of this lemony aroma felt when one consumes a genetic of cannabis where it is present in big quantity. However, not all cannabis strains that are composed of high amounts of limonene will smell the same. In fact, it is the combination with other terpenes that grants each genetic a unique bouquet and taste.

Limonene: what are its therapeutic benefits

There are several benefits that can be derived from this terpene. When used alone, in some cases it can provide relief to subjects with acid reflux problems. But, it is also worth mentioning the healing properties of this terpene when it comes to heartburn, stress relief or to boost morale. Moreover, limonene has antibacterial and antifungal properties. This is why it is often used in the manufacture of cleaning and cosmetic products. More concretely, it has been proven that limonene has repairing virtues for the skin. It helps to fight cancer, reduce digestive inflammation, relieve pain and help in weight loss.

However, you will have to know how to use it. Above all, don't overdo it, and even more so when you put it in spray cartridges or essential oils. Indeed, it could cause throat irritation, skin burns or even sneezing when used in too large quantities.

Contrary to linalool, another terpene studied mostly in aromatherapy research and only beneficial when inhaled as a vapor, limonene is also very beneficial in the treatment of several disorders when applied dermally or ingested by mouth.

What are its various effects

Not only do terpenes help define the aroma of cannabis, but they are also involved in modifying the psychoactive effect. When isolated, limonene has an energizing effect that is beneficial to morale. This is to reduce stress as much as possible. This is why highly concentrated cannabis strains are recommended for people suffering from severe depression. It should be noted, however, that not all varieties with a high limonene content will have the same effect. This is because it must be taken into account that in the composition of each variety, terpenes as well as other cannabinoids hold an important role.

The possibility for limonene alone to act beneficially does exist, but on the other side, it can also become one of the main architects of the entourage effect. According to this effect, extracts and oils from cannabis work best on subjects when all the chemical compounds in the plant, whether terpenes such as limonene, compounds such as phenols and flavonoids, or cannabinoids such as THC, act symbiotically to enhance and amplify the properties.

Simply put, in some cases limonene should be combined with several other compounds to achieve full medicinal effects.

How important is the entourage effect 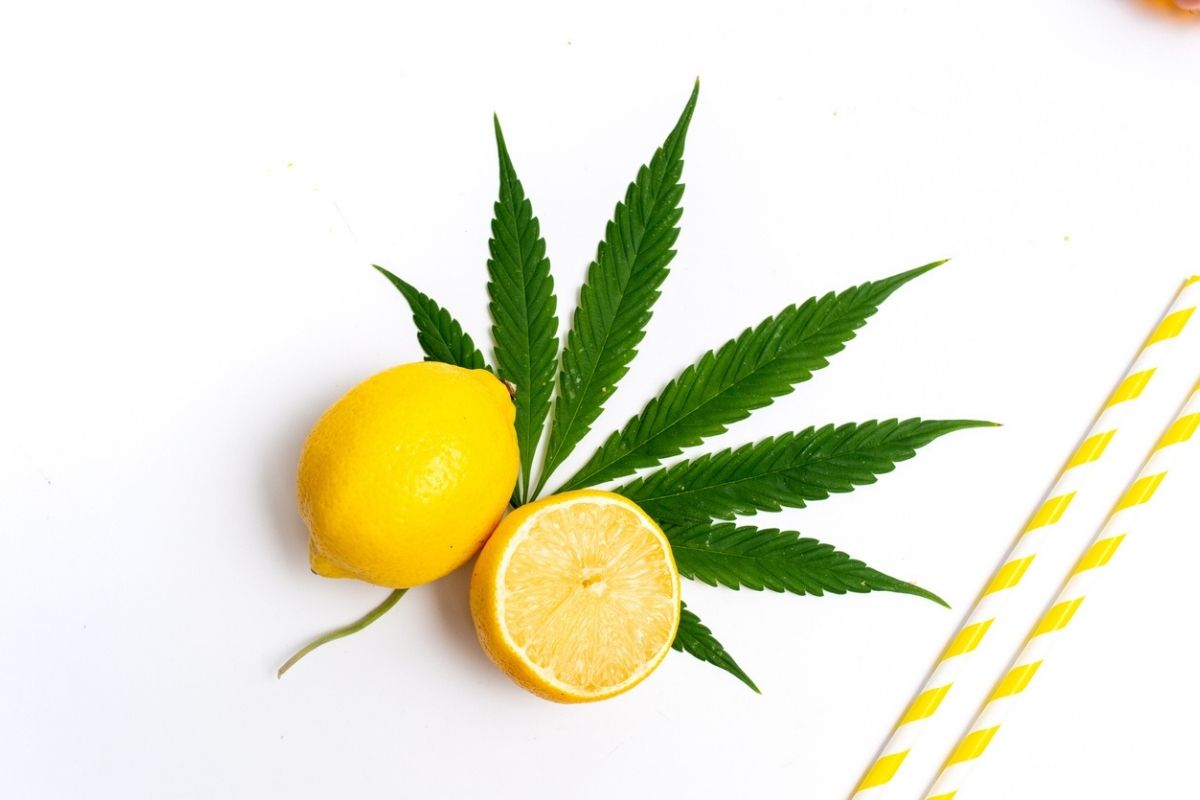 Other than their flavor and aroma function, then, terpenes such as limonene act together with cannabinoids through what we previously named the entourage effect. Thus, although limonene already has its own effects and isolated, by associating it with the cannabinoids, these can modify or still amplify these effects. In the absolute, the effects that limonene generates are more similar to those of cannabis. However, other plants that are high in limonene will offer other effects, and this is because of the entourage effect.

This can be explained by the fact that the limonene content present in the plant does not exceed 2%. THC for example, another cannabinoid, can reach a percentage of 30% in the plant in some cases. The synergy between cannabinoids and terpenes will cause a totally unique experience for each variety.

More generally, when consumed, limonene offers several other benefits. As mentioned above, it is used in several areas such as food processing where it is used as an additive to make the taste even better. It is also used in cosmetics where it gives a lemony aroma to certain balms or creams. It is also used as a natural insecticide and is incorporated into certain aerosols. This is an environmentally friendly solution, as it is entirely biodegradable, unlike other aerosols full of chemicals. Limonene is also used in cleaning products as it is a perfect degreasing solvent. In addition, limonene is a very effective antifungal that is able to limit the spread and development of certain varieties of fungi.

Limonene: what are these medicinal properties

Other than all the benefits previously mentioned, limonene has some pretty remarkable medicinal properties. Its energizing power, which has already been briefly mentioned, makes it an essential in aromatherapy. It would be also an anxiolytic and an effective antidepressant. But, it is advisable to be very careful and to be rather prudent, by taking care to make the difference between the cannabis and the other plants. Indeed, some of the latter could contain other components or terpenes in addition to limonene, which can have undesirable effects.

Limonene is also indicated as an antioxidant and anti-inflammatory to fortify the immune system or in the treatment of acid reflux. On the other hand, it is used to fight obesity and is present in products intended for weight loss. In addition, several studies on limonene and its anti-cancer virtues have recently been conducted. Trials have been conducted on women who had cancer and these have noticed a decrease in tumor in many of them.

Other studies along the same lines suggest that it would also be effective in reducing or destroying cancer cells in subjects with brain or lung cancer. However, it is important to remember that an excessive dosage or use of terpene can be harmful to the body. It could even lead to allergic reactions. Among these, we can mention itching or skin rashes on fragile skin. That's why it's not recommended for use on children or in items that are intended for the eyes or lips.