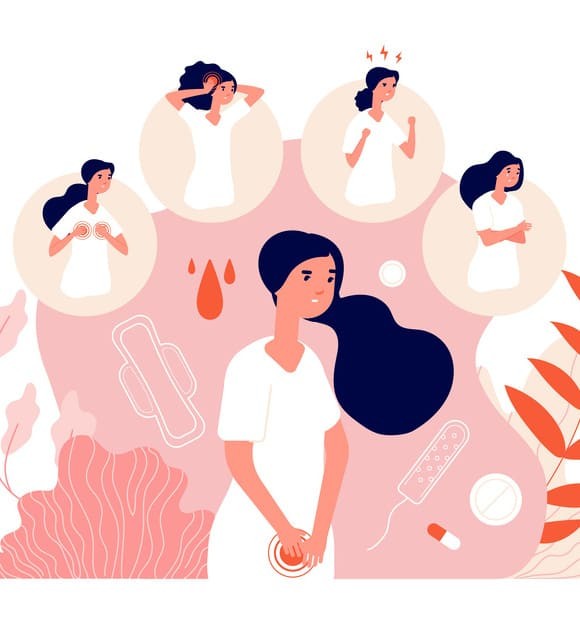 CBD is a product that has been gaining ground in the field of therapeutics for a few years. It is used more and more by almost all sexes and all age groups. In women, cannabidiol has been used to combat a multitude of ailments for a number of years. Can CBD help alleviate PMS symptoms both physically and psychologically? In fact, it is an undeniable ally of women during these difficult periods of discomfort that precede menstruation. It is of great support to them from various angles. In order to take full advantage of the benefits of this product, it would be wise to know in detail the relationship between CBD and PMS.

What is premenstrual syndrome (PMS) and what are its symptoms?

Simply put, premenstrual syndrome or PMS is defined as a set of physical, behavioral and/or emotional mutations that affect women. These mutations usually appear within the first two weeks before a woman's period begins. However, they disappear either at the onset of menstruation or within a few days of its onset.

The signs and symptoms that indicate that a person is suffering from premenstrual syndrome (PMS) are quite varied. These include unexplained sadness, mood swings, migraines, abdominal and chest pain, severe fatigue and irritability. However, it should be noted that most women who experience PMS do not necessarily have these signs and symptoms. Each woman's experience of PMS is different, as it can take many forms. While the symptoms are mild for some, they can be immobilizing for others. This means that there are no fixed signs of PMS. In fact, there has been very little medical study of PMS symptoms. A multitude of other warning signs can occur in every woman before menstruation and can be very disabling. Among so many others are diarrhea, constipation, intolerance to some odors, decreased libido, etc.

What actions can CBD have on premenstrual syndrome (PMS)?

For women with mild to moderate signs of PMS, CBD is one of the greatest unconditional allies. However, since the symptoms differ from one woman to another the effectiveness of this natural product CBD is also not stable. It depends on the type of signs or symptoms that the individual presents. In clearer terms, the effectiveness of the action of cannabidiol or CBD on PMS varies according to the symptoms. Its actions can also extend to various levels in the woman.

CBD's action on the emotional state

For the regulation of emotions of an individual with signs of premenstrual syndrome, CBD is a very effective product. It is actually known to all as a natural antidepressant since it is used for the relief of depressive states. CBD is actually involved in balancing hormones as well as chemical messengers in the brain that amplify PMS at the emotional level. This is because of an interaction of the cannabinoids in CBD with the endocannabinoid system of the woman's body. Although the effects of cannabidiol on PMS are not yet fully confirmed scientifically, it can be said that social and environmental variables act on its effectiveness.

Action of CBD on physical pain

Besides its role as an antidepressant, CBD has yet other interesting properties on premenstrual syndrome. CBD or cannabidiol can indeed be used as a natural anti-inflammatory in order to relieve physical pain. During PMS many women suffer from various physical pains as well as cramps and contractions of the uterine muscle. The therapeutic properties of CBD on all of these symptoms then allow women to experience a more soothed pre-cycle and menstrual cycle.

How should CBD be used to relieve premenstrual syndrome (PMS)?

Just as the management of premenstrual syndrome differs from person to person, the use made of CBD for its relief too is not the same in all women. The effectiveness of the product is measured by several factors such as the method of administration, dosage, and the person to whom it is administered. Thus, CBD can be used by some as a preventative while others use it just when the need arises during PMS.

The ideal dosage of CBD for PMS

Women are different from each other on different levels (physical, psychological, etc.). Because of this, it would not be obvious to indicate a precise dosage of CBD to relieve the aches and pains a woman experiences during PMS. To know what dosage to use, it is advisable to base yourself on the dosage of the product as well as on experience, because it differs from one woman to another. For example, you can keep a diary that will be used to update your menstrual symptoms in real time. This will be a great help in understanding how CBD affects you to determine how to use it effectively.

CBD forms to use for premenstrual syndrome (PMS) relief

For the relief of premenstrual symptoms, two forms of CBD are most commonly used and are in fact recommended. These are:

What other treatments exist for PMS?

To date, there are three different effective and complementary treatments or solutions that can treat PMS. These are lifestyle improvements, alternative medicine (acupuncture, herbal medicine, homeopathy) and drug treatments.

What are the effects of CBD oil on PMS?

CBD oil is an effective solution for managing the discomforts experienced before menstruation. Its use helps relieve pain, insomnia and headaches caused by premenstrual syndrome.